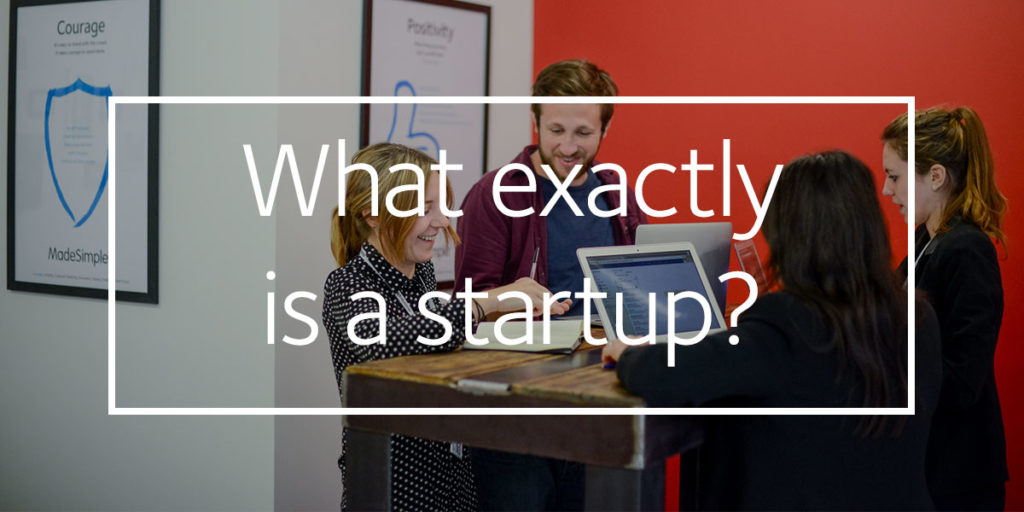 Startup – possibly one of the most overused words today. Startup culture, startup business, startup mentality. Some countries – Israel for example – have even been described as a startup nation. The term is clearly widespread, but what exactly does it mean to be a startup? It can’t be enough to work in a co-working space and sit on bean bags to be described as one, surely? Well as you will see in this post, there is more than one way to define a startup:

According to Forbes.com “A startup is a company working to solve a problem where the solution is not obvious and success is not guaranteed”. A startup is a business which improves a pre-existing process/problem. Therefore at one point Amazon would have been considered a startup as it improved the speed at which people could get items and goods delivered to them. A company that is low on resources but high on ingenuity, which  doesn’t mind taking risks, could be seen as a startup. This differentiates startups from a regular small business, startups by their nature take risks a bit more.

Despite the vagueness of the term we can all agree that a company that generates millions of pounds and employs hundreds of people is not a startup. Startups are young, maybe between two and three years old, and are often in the initial stages of developing their idea. Investopedia elaborate on this idea.

“In the early stages, startup companies’ expenses tend to exceed their revenues as they work on developing, testing and marketing their idea, As such, they often require financing.” Very rarely will a startup be self-funded, and more often than not will require outside investment either from traditional institutions, such as banks, or from investors asking for equity (a percentage) in the company.

Something that is often associated with startups is their culture. Startup culture will traditionally incorporate flat management, informal dress codes and flexible working for its employees. Now you don’t need a cool app company in Silicon Valley to create a startup culture – it comes from ensuring that your staff (if you have any) are happy and able to express themselves in a fulfilling environment. A startup’s culture is versatile and very different to the more formal hierarchical structure of a large corporate company.

Startups aren’t just about their size or how long they have been around. Another criteria to apply is the intent to grow. Startups might be small in scale but often have large ambitions to become challengers to the status quo in their industry. Cortex Hub explain  that “Scalability is to a startup, what a racket is to tennis. You’re simply not in the game if you don’t have it. So no, your uncles’ coffee shop on 5th avenue is not a start-up, unless it’s scaling like starbucks.” This is what distinguishes startups from just any small business. Startups are normally trying to grow at a quick rate. It’s therefore unsurprising that some of the world’s biggest tech giants such as Facebook, Amazon and Uber all began life as startups.

At what point is a startup not a startup?

Whilst being a startup business can be a lot fun it’s never intended to be a permanent thing. So there has to be a stage where a startup evolves on to the next level. This will depend on a number of factors such as how long a company has been around, if it’s profitable and how much market share it has. It could be that your company does so well that it gets bought out by a much larger one, which might also eliminate your company’s startup status.

Emily Spaven, editor of Tech City News, says “I think if a company has been able to stay in operation for more than three years, it’s no longer a start-up – it has learned the ropes, understands how to sustain itself and so becomes a fully-fledged company.” As previously mentioned, it can be difficult to call a company a startup if it is generating millions of pounds. So whilst a company like Google might pride itself in having a startup culture, because of its global profile, you would be hard pushed to find anyone who thinks they are a startup.

We hope this has cleared up any confusion you had over the term startup!